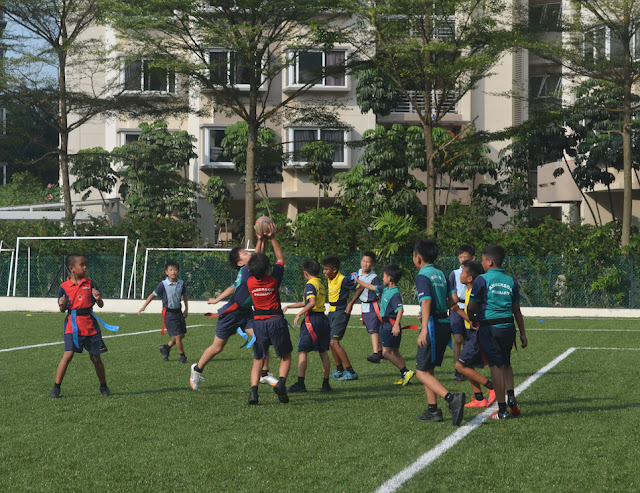 Converting hundreds of non rugby playing schoolchildren into potential players and rugby fans over the next four years - That is the goal of the Tag 7s programme organised by Rugby Singapore and the Singapore Rugby Union. The initiative is also part of the eight-month long youth outreach program for the HSBC World Rugby Singapore Sevens.

Targeting youths between the ages of 8 to 18, the Tag 7s programme aims to introduce rugby in schools that do not currently have a rugby programme in their curriculum and nurture their interest in the sport. The programme includes the training of both children and teachers through the simple and fun game of Tag rugby. Each school will also receive a set of equipment that includes tag belts, training balls and training manuals.


Under the Tag 7s program, Rugby Singapore and SRU hopes to reach out to 100 schools over 4 years. For the first year of this program, Tag 7 coaches are introducing rugby to over 400 students. Programme participants will also get a free ticket to next month’s HSBC World Rugby Sevens at the iconic National Stadium to witness world-class rugby players in action. Tags 7s is a modified version of rugby with simulated scrums and lineouts so that children can better understand the 7s game when they watch it at the stadium.

“I have never played rugby before and this program is really fun and interesting,” said Clarence Ang, 11 of Anderson Primary. “The coaches taught us how to pass the ball and the importance of teamwork. I hope my school will have rugby as a co-curricular activity so that we can compete in the National Schools competition.”

Added classmate Cheng Hong Yu: “I’m super excited that we will get a chance to visit the National Stadium to watch the World Rugby Sevens. I’ve never been to a rugby tournament before and I heard that there is a carnival at the Sports Hub. I can’t wait to play X box, check out the Rugby Bungy and play in the Rugby Superhero Challenge at the Fun Zone.”

Other than Tag 7s, the HSBC World Rugby Singapore Sevens community outreach initiatives so far include the Heroes in the Making program (for outstanding youth players), the Pass it On & Adopt a Country program (for rugby playing schools), the ongoing School 7s Under 14 competition which climaxes on April 16 with the historic first ever Schools 7s final at the National Stadium during the World Rugby Sevens.

“We have adopted a comprehensive outreach program that reaches out to students across Singapore from rugby playing schools to non-rugby playing schools. Growing the rugby family through experiential activities such as this allows us to increase participation in the sport and also grow the fan base for the long term events we have in Singapore such as the World Rugby Sevens Series.” explained Low Teo Ping, Chairman of Rugby Singapore.

Schoolchildren from the various community outreach programmes have received free tickets to watch the likes of All Blacks World Cup hero Sonny Bill Williams and United States fastest man in rugby Carlin Isles in action on April 16 and 17 at the National Stadium.

Tickets to Southeast Asia’s biggest rugby tournament are in great demand and already Category One and Three tickets are running low. Two-day season passes for adults range from SGD 50 to SGD150 while Category 2 and 3 tickets for children under 12 are just SGD2. Tickets are available on www.singapore7s.com and all prices exclude booking fees.
Events