on March 30, 2016
Oh!K (Astro Channel 394) is set to captivate the hearts of viewers this March with two brand new MBC express titles, Marriage Contract and Monster. 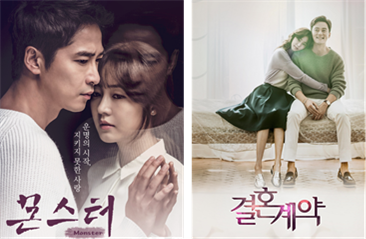 Viewers can catch Marriage Contract on Oh!K every Monday at 8:55pm, 48 hours after its Korean premiere. Following the life of Hye Soo (UEE from K-pop group, After School), the series depicts the life of a single mother who is trying to raise her daughter after her husband’s tragic death. Recently diagnosed with brain cancer, she looks for a kind soul who can care for her and her daughter in her final days.  As fate would have it, Hye Soo meets a young man (Lee Seo Jin) who is in need of a liver donor for his ailing mother. In exchange for her help, he promises to marry her and care for her young child.

Adding to their express slate, Oh!K will also premiere Monster on Tuesday 29 March 2016 at 8:55pm. The drama series features a star-studded line-up including actor, Kang Ji Hwan who is best known for his roles in Big Man, Incarnation of Money and Lie to Me, and Sung Yoo Ri, a former member of a K-pop group Fin.K.L. Also joining the cast is international movie actress, Claudia Kim, who starred in the blockbuster movie, The Avengers: Age of Ultron. Fans can also look forward to appearances from Taiwanese actor, Chen Bolin who will play an important role in advancing the show’s plot.

Overcome by personal grief, Kang Ki-tan (Kang Ji Hwan) pursues his vengeful mission to take down societies elite. Amidst of all his ugly behaviour, an unexpected love story blossoms showing the true value of life and friendship. Oh!K viewers can look forward to brand new episodes every Tuesday and Wednesday, 24 hours after its Korean premiere.


Be sure to catch Oh!K’s latest express titles, Marriage Contract every Monday at 8:55pm and Monster from 29 March 2016, every Tuesday and Wednesday at 8:55pm to find out how these epic stories will play out.
Oh!K is currently available in Malaysia on Astro Channel 394. For more information, please visit OhK-tv.com or Facebook.com/OhKtvAsia.
entertainment