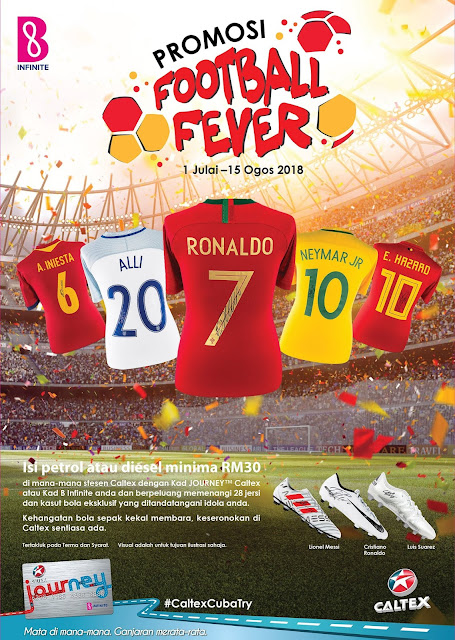 From now until August 15, 2018, customers need only spend RM30 on a fuel transaction in a single receipt at Caltex® stations nationwide to stand a chance to win these exclusive merchandises. A total of 28 lucky winners will be selected at the end of the campaign.

Caltex® believes just like the World Cup which is one of the most sustained sporting events, the sustainability for engines are a priority to the brand. Caltex® has continuously proven time and time again that the brand’s quality products are able to provide maximum protection and deliver first-class performance for engines.

Jeff Tan, Deputy General Manager of Chevron Malaysia Limited is quoted as saying, "The values of World Cup and the strength of the football players resonate deeply with us. Just like football players, we are determined to go the extra mile to ensure that we score a goal; in this case, to ensure our engine fuels pack a punch against friction, wear and sludge deposits in your vehicle’s engine, for a better, smoother and worry-free ride.”

“Here at Caltex®, we constantly seek out methods to strengthen relationships with our customers, to make certain they have a great journey, no matter near or far. As the World Cup was one of the key events that unite people from all walks of life, we decided to leverage on it as a way to bring people together and to give customers a little form of reward for their never-ending support for the Caltex® brand.”

For more information on Caltex® and its products, please visit www.caltex.com/my or follow their social media at https://www.facebook.com/Caltex.Malaysia/ for the latest updates.
Events